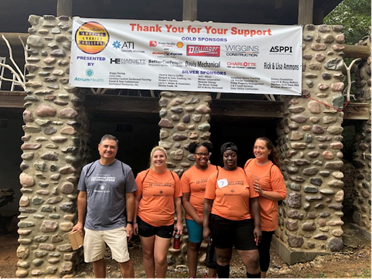 Brewer Hendley and Market Express had the pleasure of being a gold sponsor for HealthQuest’s Amazing Charity Challenge. The event has teams of four who compete in teambuilding challenges to win $2000 for a charity of their choice. Led by Buddy Brewer as the fundraising chairperson for HealthQuest, a record-setting $70,000 was raised to help local citizens without prescription insurance afford their medications.

In 2018, HQ was able to provide $18.76 in prescription medicines to individuals for every $1 in revenue taken in. At that rate, this year’s fundraiser alone will provide an additional $1,357,023 in prescription medicines to individuals in need of them. Market Express and Brewer-Hendley were also able to field two teams of four to compete in the event. In addition to being a gold sponsor, many Market Express vendors stepped up to make significant donations for this great cause.

JDRF Walk for the Cure 5k

JDRF Walk for the Cure 5k

Brewer-Hendley Oil Company is here to provide you the best products & services.

Brewer-Hendley
Your First Source in Fuels & Lubricants. Large enough to keep you going, small enough to know you by name.